Creative inspiration doesn’t grow on trees, which is a shame on so many levels – imagine an orchard full of idea trees! Sometimes inspiration strikes in the shower, while you’re running for the bus and sometimes it goes on an extended holiday and doesn’t tell you its forwarding address. We chatted to four creative women to find out the secrets behind their working habits and how they tackle creative droughts…

I’m a freelance writer, copy editor and graphic designer – so basically I love making things look and sound pretty! I spend most of my working hours writing for websites.

Where is your favourite place to be creative?
As a freelancer, my office can be anywhere that my laptop gets wifi – one day in the local cafe, the next in my backyard. I seem to draw creativity from a changing environment, sometimes even just moving workspaces can spark creativity when I’m struggling with ideas.

What’s your favourite time of day for getting creative?
I’ve always been a night owl, so the late hours are usually the best time for me to get creative. There’s something about the stillness of night that opens my head to ideas. Add to that a full moon, and I’m on a serious creative roll!

What are your favourite ways to procrastinate?
Oh wow, where to begin?! I’m still trying to learn how to stop myself from getting into a social media/YouTube/TED vortex while researching on the internet… I also end up replying to every starred email in my inbox when I’m avoiding a story I need to write. Once I even caught myself rifling through my entire wardrobe for op shop donations when I was supposed to be creating interview questions.

Where do you look for creative inspiration if you’re struggling to come up with ideas?
When I need to get the creative cogs rolling, I usually find a walk on the beach puts me in the right headspace and I’ll end up jotting a bunch of ideas in the Notes section of my phone. For design inspo, I also find a scroll through websites like Designspiration, Creative Boom and The Dsgn Blog can get ideas firing. If you’re struggling to come up with ideas, don’t stress that you need to create something that’s never been done before – simply putting your own individual spin on it will make your version unique. It’s totally acceptable to find inspiration from what others are doing around you – in that way, we also create a community. 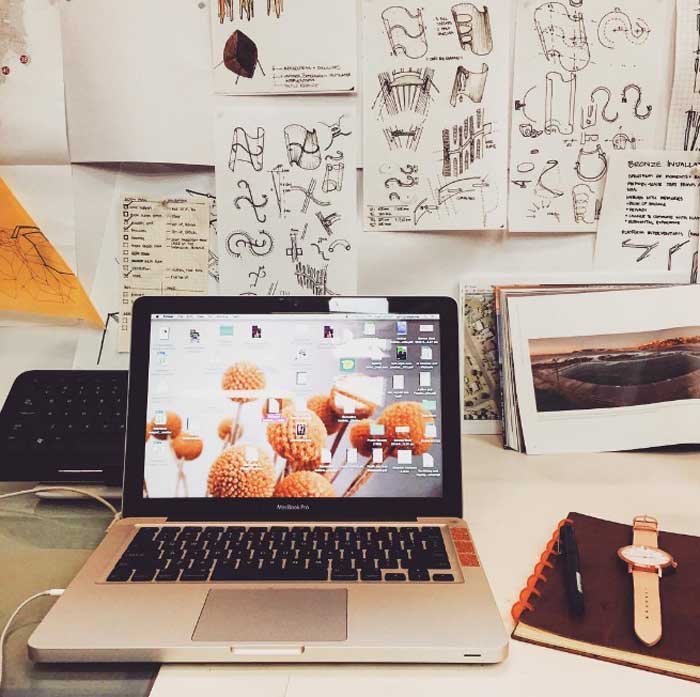 Top three songs for inspiring creativity…
It depends on the project I’m working on at the time. If it’s a reflective feature, an artist like Leonard Cohen or Beach House will get me in the right mood, whereas a snappier piece might call for the likes of Anderson .Paak or Kendrick Lamar. But then again, sometimes good music just leads to more procrastination…

Which creative makers have you had your eye on recently?
I’ve been stocking up on all kinds of natural and organic beauty products free from the usual nasties – some of my fave makers include Acorelle for perfume, Hurraw for lip gloss and Biologika for deodorant. I love that these guys stood up for what they believed in to create products free from toxic synthetic chemicals that are also environmentally and animal friendly.

What’s the secret to keeping yourself on track?
To be honest, I usually just let myself veer off track when I need to. Creativity doesn’t come on tap; there’s no button you can press to switch over to creative mode and come up with sparkling lines of prose. If I try to force myself into being creative when I’m not feeling it I either end up staring at a blank screen for hours or I write really uninspired stuff, which I’ll probably have to rewrite later anyway. So I prefer to cut myself some slack and indulge in procrastination when it’s prodding me. I know that soon enough the right words or ideas will come, and that way work will always remain a pleasure.

I am a designer and maker of clothing and jewellery, who attempts to turn trash into treasure. I like to work with secondhand clothing and found objects to create new pieces that have a story behind them.

Where is your favourite place to be creative?
A private sanctuary filled with stimulus – clothes, objects, images, words. I tend to have a lot of stuff around me! Natural light is also a high priority.

What’s your favourite time of day for getting creative?
First thing in the morning, after making good progress on something the previous night – but had to stop working to get some shut-eye. Waking up excited to get back into it is a great feeling.

What are your favourite ways to procrastinate?
Making coffee, gardening (indoor gardening these days, as I no longer have an actual garden!), moving furniture around and re-decorating. I often notice the kitchen could do with a clean as well!

Where do you look for creative inspiration if you’re struggling to come up with ideas?
I like to revisit and develop ideas I’ve put aside so I’ll look through my journals, which contain sketches or notes and tear-outs from magazines, samples of sewing techniques I’ve kept. I might also go through my boxes of second hand and vintage clothes or I’ll look through some fashion and textile books.

Top three songs for inspiring creativity…
I always have music playing while I work but can’t think of three songs in particular; however, my three most played artists would be PJ Harvey,  St Vincent (girl power!) and Conor Oberst/Bright Eyes.

Which creative makers have you had your eye on recently?
Paula Dunlop’s contemporary beaded jewellery gets me really excited! She uses the most beautiful Japanese glass beads to create amazing sculptural pieces. She makes them all herself at her home in Brisbane under the watchful eye of her handsome studio cat named Wendal! 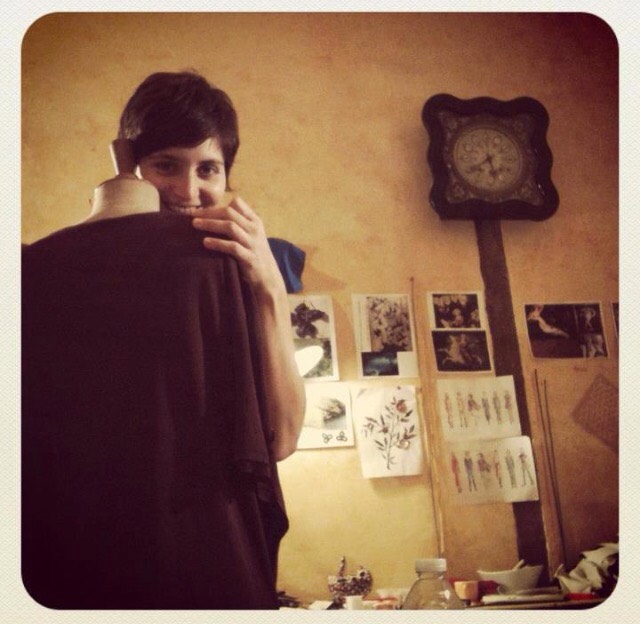 What’s your favourite inspiration snack?
I can’t go past a cuppa and the occasional sweet treat.

What’s the secret to keeping yourself on track?
I rarely keep on track! It’s no secret that I need to be more organised, stick to a plan and have a realistic concept of how long it takes to make things!