Patience Hodgson has more spark than a box of matches left on a burner. Not only does she rock hard on stage with her band The Grates, but she runs the successful Southside Tea Room in Morningside (in Brisbane) with husband, and fellow band member, John and is mum to energetic baby Soda. Patience shared some insights into what life was like for her as a teen, how she got into music and her secret to having so much confidence. 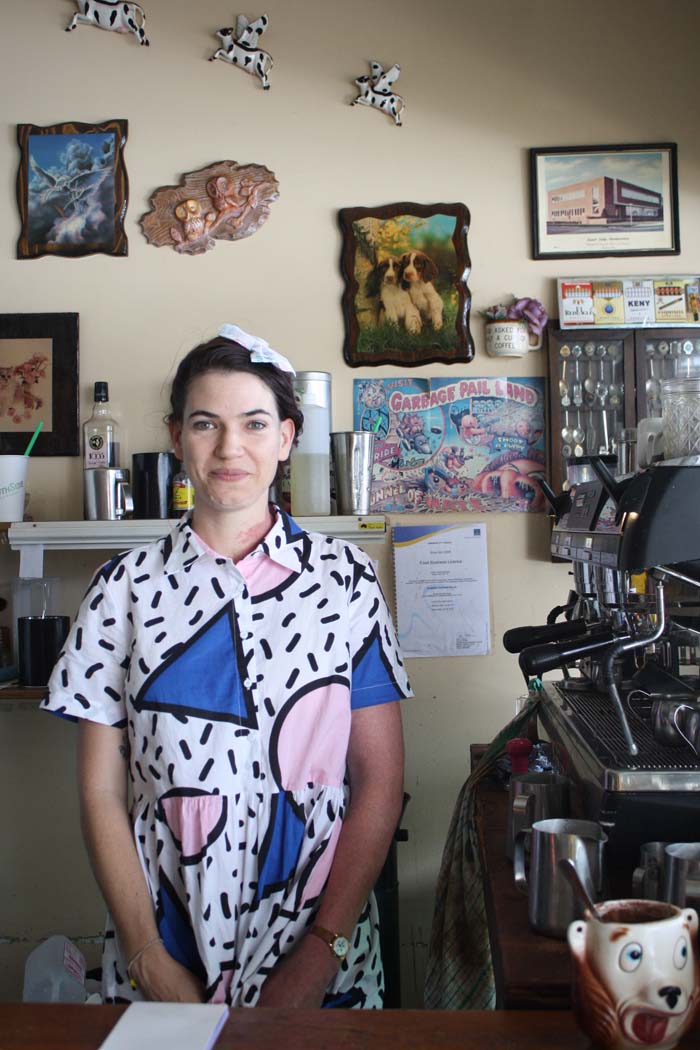 How old were you when you started The Grates?
It would have been 19, 20 and 20 – because that’s the song. I was 19, John was 20 and Alana was 20. I’d never sung in a band before, John and Alana had been in bands and had been doing band stuff since they were in high school.

How did the band get started?
I come from a zero musical family. No one expected it, not even me. It was the same reason most people start bands, to just hang out with your friends and have a good time.

I really loved John and Alana and thought that they were super motivated. I liked that John had organised a bunch of festivals out in the Redlands when he was a teenager. And they were organising shows at venues around Brisbane, ones that basically only friends and family would attend. They were actively having a huge role in their own lives. They weren’t saying, oh these other bands are putting on shows but maybe we can get on somewhere in the bill. They would just ring up venues and organise gigs and say ‘can we play with my band?” and then they’d get a couple of other bands and the venue would put them on.

Have you always been so confident onstage and in real life?
I’ve always done things that make me feel good, which is being loud or talking to a lot of people or going into a party and thinking ‘I want to meet everyone here’. Because that’s just naturally where my brain’s pleasure lies, that’s where it seeks it out. But I definitely had huge insecurities at times in my life.

I remember I got teased a lot and I’ve got a really big birthmark. And I think I’m really lucky growing up with a birthmark. My parents have never raised me any differently and I think it was a great thing for my confidence. Because there was never one part of me as a child when I was developing emotionally that was made to feel like I was different.

And then when I went to grade eight. I guess it was those transitions of going into high school, I kind of felt quite different. For the entire year of grade eight I wore a jumper.

And I have no idea how it resolved: when I look back it’s just not in my memory. I went to a different school in grade nine, but that summer I spent just hanging out with friends and I don’t know if it just happened in that six weeks I had off or whatever, but when I went into grade nine it was just a phase, I was over it. It wasn’t a problem anymore that I had a birthmark. I just didn’t care about it.

Why it’s totally fine to be a bit terrified…
I had someone who was working [at the café] and they were really scared in the beginning and their mum was like ‘you know he’s terrified the whole time he’s here’. And I was like, who cares. Eventually you’ll get used to it and aren’t most people terrified at their first job? You just walk around being totally terrified.

I’ve met a lot of people in my life who aren’t terrified of doing things when realistically I would be. And then you get in the realm of having overconfidence and you’ll just crash and burn. A bit of fear is a really good way to keep you from failing. You want to look at those books, you’ll stay up an extra half an hour to make sure you’ve got your budget planned or you’re not totally going to sink the ship. So that’s the good part of being terrified.

Tell us about your school days…
When I was in grade four I went to a new school, I went from a really small school to a bigger school and when I got to that school I wasn’t as accepted. I felt really weird. I was just the kid that sat in the library and I was super duper unhappy.

I remember one day the Principal asked me ‘hey Patience how are you going?’ and I said, ‘you know what I’m having a terrible time’. And he said, ‘really?’. And I said, ‘yeah I’m going home’. So I picked up my bag and I went to my bike and the Principal was running after me and I remember I just ran down to my bike. I left the school and the Principal had gone and called my mum. When I got to the driveway of our house my mum was waiting there and she gave me a big hug and said ‘you know you don’t ever have to go back to that school ever again’. And it was really wonderful and I’m so glad she greeted me like that.

What about your teen years?
When I was 16 and looking for my first boyfriend [my birthmark] became a problem because I started thinking ‘I think it’s because I have a huge birthmark that no one wants to be my boyfriend’. But then I did end up getting a boyfriend in grade 12 so it didn’t really matter. That was again just a little phase that I got over.

And then in high school I also looked at the other side of being so different from other people physically sometimes. I would get teased a lot for having a birthmark but that was always a really good filter for me to know who a jerk was. If you’re teasing someone for having big ears or being overweight or having red hair or having a birthmark you’re just not really a nice person to hang out with. So I then found friends in high school who didn’t tease me and they were just great. And so when I got teased it was like ‘Eh, it’s your issue not mine’. I’m just really grateful that I have an arm that works. It’d suck so much more not having an arm than it does having one that’s red. I think all of those things fed into feeling really confident on stage.

What do you want teach soda about the world?
I just really want to teach her about the function of her body. I feel really terrible about where we’ve always been as humans when it comes to appearance. It really upsets me. And I think the other thing is that most things that are worth doing are lots of hard work. And I say this all the time to young people. Except for relationships. They are the one place where hard work doesn’t pay off, most of the time.

Any last pearls of wisdom?
It’s really nice being able to hold something and create something, so I think if you can chase that feeling in whatever field makes sense for you. Whatever it is that makes you feel like you’ve accomplished something and you’ve managed to get something done and you feel like you’ve overcome a hurdle and you’ve learnt things and you’ve done it whatever makes you feel all of those good feelings. And just know that fear is normal, feeling insecurities are normal, but unless you do something or try something you won’t ever do it. And don’t be mean to people because that’s not helping anyone.

Find Patience on the grams @paehoddy and in collaboration with crafty lady Rachel Burke (of @imakestagram fame) on @fancyfreetime.