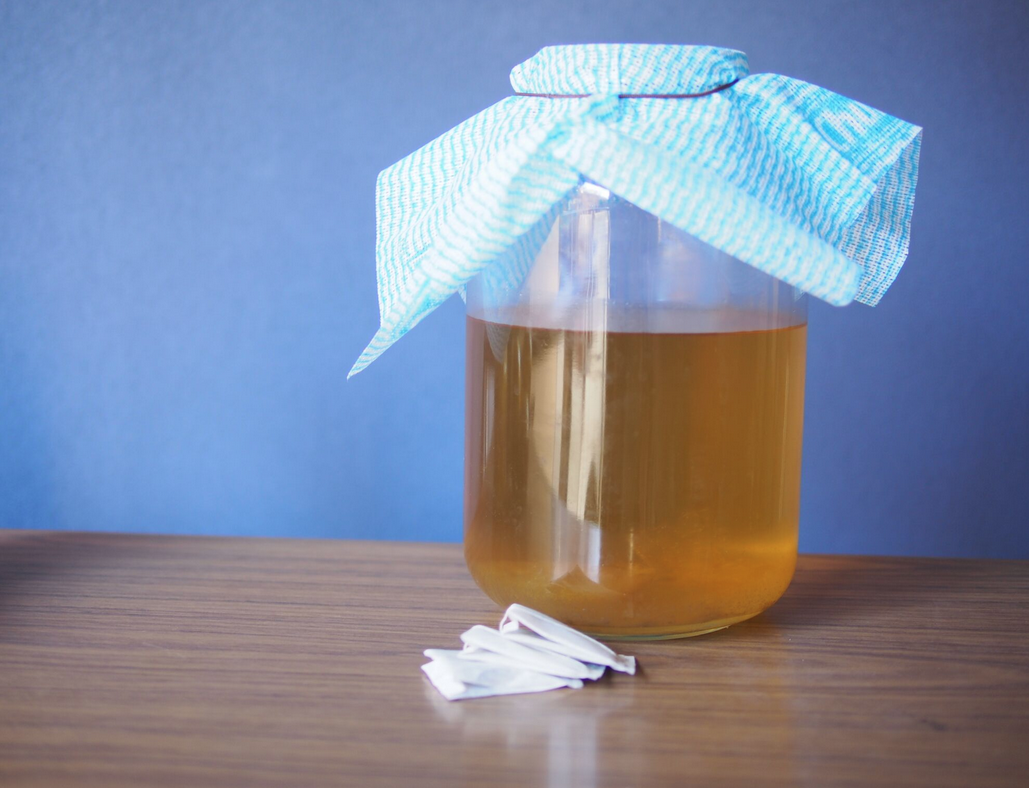 If you’re partial to the odd bottle of kombucha, but don’t fancy paying a pretty penny with each pop, it’s time you brewed your own. It might seem a strange process at first, when you set your eyes on the oddity that is your SCOBY, but you’ll soon be guzzling this delicious fermented beverage by the litre. For those who haven’t sampled ‘booch yet, it’s a semi-carbonated drink with a tangy taste (almost like a very mild vinegar) that is created when a SCOBY (a symbiotic conlany of bacterial and yeast that looks like a slimy disc) ferments sugar and tea. Kombucha is touted for having many health benefits, but we mostly imbibe it as a refreshing bevvy on warm days.

Notes: the full process will take around ten days – but making your batch will take less than half an hour. It’s a good idea to sterilise your jars the first time you make your batch, but generally a normal wash with hot water and detergent will suffice. In hot sub-tropical climates (hello, Brisbane!) you may only need one week to brew, but in cooler places you may need up to two weeks – you’ll learn to taste when it’s ready. If it’s still sweet, the SCOBY hasn’t finished eating up the sugar; if it’s pure vinegar, you’ve gone too far. Try a store-bought batch before you make it at home, so you have an idea of how it should taste!

You might think you haven’t got a new SCOBY until you see it’s sealed the top of your liquid off. Don’t worry if it doesn’t multiply the first time. If you think it’s looking ready, stick a spoon in and see! If it’s still sugary, then SCOBY hasn’t finished its job, but if it’s getting a nice acidic taste then it’s probably good to go! Once it’s done, store your SCOBY’s together and keep enough of your kombucha to store around the little critters and to use in your next brew (this will be your mother tea).

It’s best to strain before you drink it, to remove the little yeasty particles, and it’s nicer to drink from the fridge. It’ll last months in there, if you’re not drinking much of it (but that’ll never happen).

We usuuaalllly like to drink it plain, but at this stage you can experiment with fruits (frozen or fresh, both are fine), ginger or herbs to make new flavours. (We’ve also tried lavender, which was pretty amazing). Combos like mint and berries work well, and peach is great too. Sky’s the limit!

Your fruit/flavour fermentation will take another four days or so. All you need to do is pour some of the tea (without a SCOBY this time, but those gross floaty bits can stay in if they’re still around), and a small handful or so of your flavourings – again just leave your brew on a bench or wherever (not in the fridge yet).

It’s super important to note that if you’re doing a particularly fizzy fruit, like a strawberry, make sure you only fill your jar/bottle up about 3/4 of the way – as they can really fizz up, and even explode. After the four days, just strain the liquid through a sieve again and you’re good to go! Keep these ones in the fridge when they’re ready to devour.