When littleWren interviewed librarian Karys McEwen, we got all fired-up, inspired and eager to start our own feminist clubs.
Here’s what we learned from the woman we want to be when we grow up … 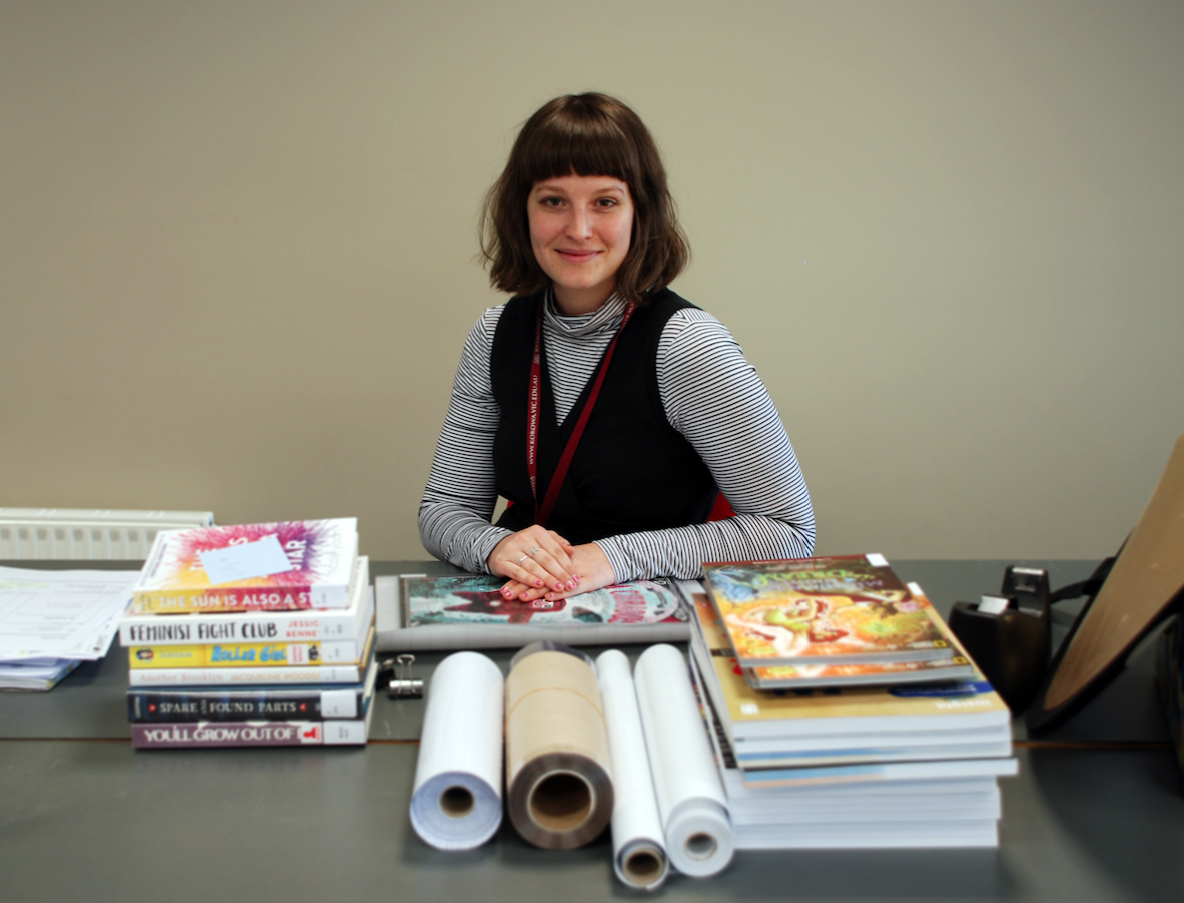 As a librarian, you must know of some great feminist writers. Who are some of your favourites and what books would you suggest as recommended reading to your students?

I love it when a student approaches the library desk and asks for a feminist book! One YA author that I will always recommend is Louise O’Neill. Her stories are dark and ruthless, but absolutely brilliant. She’s kind of like a teen version of Margaret Atwood.

I am also often loaning out some of my personal favourites like Take Three Girls by Cath Crowley, Simmone Howell and Fiona Wood, The Female of the Species by Mindy McGinnis or The Disreputable History of Frankie Landau-Banks by E Lockhart.

When it comes to non-fiction I usually recommend books like We Should All Be Feminists by Chimamanda Ngozi Adichie or Fight Like a Girl by Clementine Ford. And of course all of the inspiring women anthologies that have come out recently are amazing, such as Good Night Stories for Rebel Girls and Shout Out to the Girls!

You helped launch a feminist club at the school you were librarian at. How did this come about?

At my previous school (a private girls’ school in Melbourne) I organised for author Fiona Wood to speak at assembly during Book Week. At one point, she asked the audience who among them considered themselves a feminist. In a room of over 500 girls and their teachers, only a small number raised their hand. Later that day, two year eight students came to me to confess how disappointed and ashamed they felt that so few of their peers identified as feminists. They wanted my help to start a Feminist Club at school to raise awareness about issues of gender equality, and initiate a discussion about the importance of feminism. And so, the Feminist Club was born!

What kinds of things did you talk about in the feminist club? What was its central purpose?

At its core, the Feminist Club was an informal discussion group. We met once a week to talk about things that had been in the media, share our own experiences, and collect ideas for spreading the word about feminism and working to change any negative perceptions. We watched documentaries and recommended books to each other.

But we took action as well! For example, one of the biggest things the students did was campaign to have trousers added to their school uniform, and they were successful. Power to the pants! In my time there, we also wrote a feminist club manifesto and created posters to put around the school. Since I have left that school, the Feminist Club has continued to meet and create positive change.

What tips would you suggest to someone wanting to start their own feminist club?

We used this Rookie article as a starting point for the Feminist Club, and it is filled with plenty of helpful tips. One in particular is making sure that you have adults that you trust to help out and support the club. If the club is at a school, you also need to run the idea past the leadership team In the article, there is also some information about what to do if there is opposition to your club, we which did have to deal with at one stage. Feminism is still considered controversial in some communities, and it is necessary to prepare for that just in case.

One thing that I didn’t think of at first, but became really apparent after a few meetings, was making sure the club didn’t become too much of a downer. Of course it is vital to discuss the hard topics and share experiences so we can learn from them, but it is also really important to inject a lot of positivity and fun into meetings so that people feel good about taking part, and leave feeling hopeful and inspired.

What’s something you wish more people understood about feminism?

Many of the students at the school I worked at felt they didn’t identify as feminists because they didn’t hate men and did not believe that women should have more rights than men. This was very worrying to hear, as that is absolutely not what feminism is about! Through the work of the Feminist Club, we tried to educate the school community that gender inequality and the patriarchy are harmful to everyone, not just women, and feminism is about equality. It is called “feminism” to recognise that women are not currently equal, and that is what we are trying to achieve.

The other thing that I think more people (especially teenagers!) should be formally educated about is that even the seemingly small things create inequality. Language is one of those! Rape culture doesn’t just include direct actions, but also sexist jokes, catcalling or the differences in behaviour expectations for boys compared to girls. All these small things add up, and feminism is all about working towards solving this problem.

If you could meet any famous feminists, who would you love to talk to?

Some of my favourite women who fight the status quo are Judy Blume, Rashida Jones, Miranda July, Margaret Atwood and Roxane Gay. I would probably pass out if I was lucky enough to talk to any of them!

Can you share any great feminist resources for young people?

Online magazine Rookie has always been great for inspiring young people to fight for what they believe in, and they do an annual printed edition too. One of the students in the feminist club recommended the documentary She’s Beautiful When She’s Angry to me, and I think that is a great film for young people that want to learn a bit more about the history of feminism. Netflix has a bunch of other great feminist documentaries too. The Feminist Writers’ Festival has plenty of great articles and resources on their website. Lenny Letter is a digital newsletter with plenty of good info about themes such as feminism, political issues & current events, although it is aimed at adults so teens should be aware that it may contain mature content.

Finally, what would you like to tell those who think we no longer need feminism?

I was told recently by another school librarian that the gender war was won many years ago. I saw red for a few moments after that! At the end of the day, it is important to look at the cold hard facts. We need feminism because the wage gap still exists, because 1 in 5 Australian women will experience sexual assault in their lifetime, and numerous other disturbing truths about gender in our own society. This scary stuff is not just opinion, but backed up by statistics and current affairs.

We still need feminism because women are not equal to men, but I hope that we will achieve that at least within the lifetime of the young students I work with.